Seisnetics is a process which automatically identifies and categorises all surfaces within a 3D data volume enabling the creation of Geo-Models which are based on a review of all the data (rather than just a small portion of it). 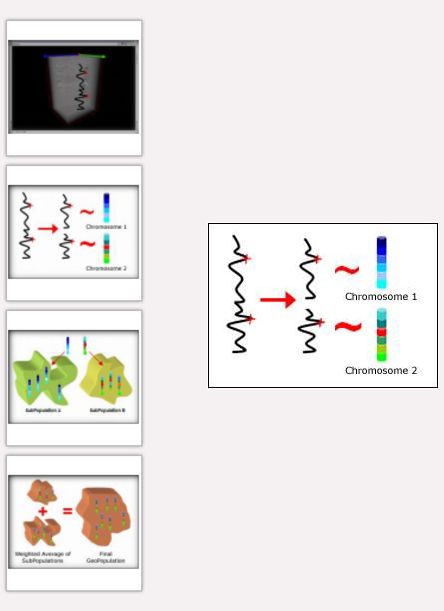 Seisnetics uses a patented genetic processing algorithm to automatically segment volumes of data into populations of genetically related waveforms. Once the process has finished virtually all populations, Peak and Trough Surfaces, are identified and the "GeoPopulations" saved into a 3D visual database. The visual database enables the user to review, sort, filter or export Trough or Peak surface attributes for any or all desired GeoPopulations. Alternatively, the user may choose further processing options available within the viewer for more geologically constrained analysis (e.g. Seismic Facies Maps, etc.,).

The Seisnetics process is independent, unbiased, extremely fast and can work efficiently with either small or very large data volumes. Consequently, it is often used anywhere single or multiple volumes of seismic data would benefit from a timely, accurate, robust and independent assessment.

The seismic volume can be seen as a Population of individuals (traces/chromosomes) which can be segmented into waveforms/genes.

Defining the Chromosome
The seismic volume can be seen as a Population of individual traces. If we consider each seismic trace to be analogous to a Chromosome then segments of the Chromosome (Genes) are waveform elements from the original seismic trace. Thus each individual Seismic trace (Chromosome) is characterized by some combination of its waveform segments (Genes). These Genes represent certain characteristics (attributes) of the seismic data which when organised into groups of genetic similarity, map the variability of data volume.

Creating SubPopulations
The objective of the segmentation is to find GeoPopulations (geological events) that are composed of Chromosomes with the most similar genetic characteristics (i.e.location, trace shapes, frequency etc.,)

Early SubPopulation Evolution
Individual traces are automatically selected. Based on their genetic compatibility with others, they begin to group into SubPopulations.

Selection and Reproduction
The Genotype is the common waveform associated with each population. As the evolution continues a new larger GeoPopulation inherits the genotype of its two parent SubPopulations.
GeoPopulation evolution then continues within the entire volume to completion.

The seismic data interpretation challenge:
increasing size
The main objective of 3D seismic data is to help geoscientists
develop geological models of the subsurface. Over the last decade or more, the number of 3D seismic data acquired, their size and density has increased dramatically. Large expenditures have been made collecting, processing and reprocessing these data to create seismic data libraries consisting of 100’s of Terabytes of data. However, the way in which these datasets are interpreted has not changed very much in the last twenty years. Typically, these classical methods are time consuming as they require cumbersome picking tasks. This approach is plagued by time inefficiencies, often meaning only small portions of the available data can be examined leading to low return on seismic data value. 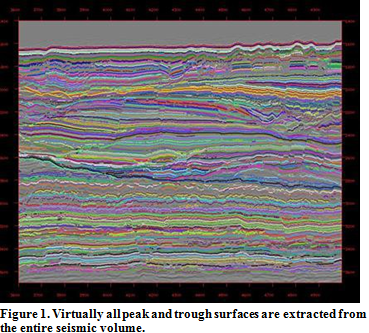 Seisnetics a new approach: unbiased and fully automated
To address this technical challenge, a new methodology based
upon genetic segmentation has been developed, patented and refined by its application to several hundred 3D seismic data volumes. This fully automated pre-interpretation processing technique Seisnetics globally segments an entire 3D Seismic volume and simultaneously build populations of similar waveforms based upon their genetic and spatial similarity. Upon completion of the processing, virtually every significant peak and trough surface in the 3D seismic volume has been extracted and catalogued into a queryable spatial database. Since this global methodology applies the same mathematical criteria throughout any 3D seismic volume, the resulting surfaces are consistent and unbiased which provides the interpreters with a corporately compliant spatial database. 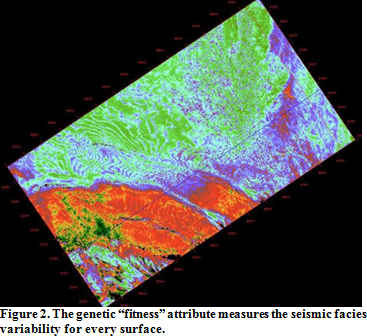